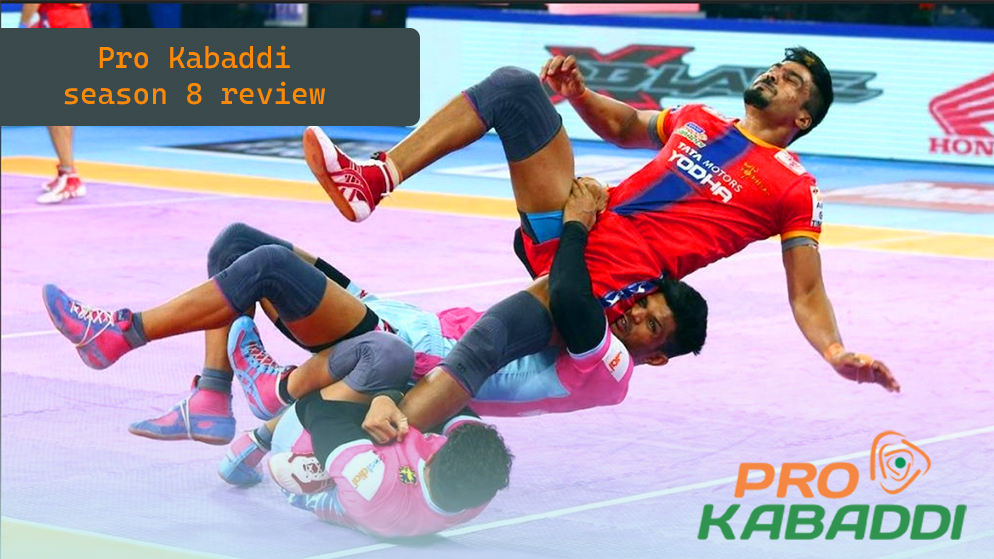 Kabbadi is one of the most popular sports in the world. It is a heavy contact sport and has 7 players per side. It is the state game of many Indian states and Bangladesh’s national game. In Kabaddi, a raider is sent to the other side and tasked with touching as many defenders as possible.

Each touch earns him one point. Every raid is very fast, which makes Kabaddi an exciting game to watch. Kabaddi gained more attention in India after the Pro Kabaddi League, which is in its 8th installment now. It is wildly famous and has won the hearts of millions across the country.

After a two-year break, Pro Kabaddi League returned in December 2021. 12 teams battled out in this competition, which resulted in one epic final match that broke many hearts. The league spots were tough to decide as no team wanted to give up. No one knew who was going to qualify until the last minute. A league as epic as this demands a review. Here it is:

Setting season records, Shadloui scored 10 super fives. No one had ever done it in a single season. In addition, Shadloui scored 86 tackles during the season, 12 more than anyone else. The most amazing part is that he did all this in his debut season of the pro kabaddi league.

Another player who deserves mention is Naveen Kumar. He was down for a few games but made a comeback in style. He was faster than before and outsmarted all the defenders. With his renewed vigor, he was the X-factor during the finals and helped his team win the pro kabaddi league trophy.

Sometimes the team does not perform, but there is this one player who plays brilliantly. For Bengaluru Bulls, it is Sehrawat. He scored 320 points, of which 180 came from Super 10s. With none of the other plates contributing, he helped his team reach the semi-finals. Many had thought Bengaluru FC would tank in the group stages. But thanks to Sehrawat, they reached a respectable position.

Most Improved Team in Pro Kabaddi

Puneri Paltan is a team that has always been in the news. They have won the pro kabaddi league before, but in the last season of pro kabaddi, their performance was miserable. Being 8th last was not what the team stood for. This season, they changed the tide and came first.

There was an 11-point margin between the first two teams. This was a first in the history of the pro kabaddi league. They had lost their star raider Pradeep Narwal to UP Yoddha. However, they made it up with their strong defense and acted like walls.

Players such as Rahul Chaudhari and Nitin Tomar were battling issues with their form. To overcome this, coach Anup Kumar made changes. Inamdar was made the lead raider, and Chaudhari was rested for the season. However, the youngsters delivered when it mattered the most. By beating Jaipur Pink Panthers, they qualified for the pro kabaddi playoffs.

Sometimes a blink of the eye is all it takes to miss a move. The players move like water, and Pardeep Narwal is an example. Battling some minor injuries, Pardeep moved into the raid. He had gotten only one point in the last 16 minutes. But, with some swift movements, he bought 5 more in just a minute. Such was his skill that the defenders applauded his moves.

While we always focus on the winning team, we should also recognize the most hardworking one. Tamil Thalaivas had a forgettable but remarkable season. They lost 11 matches and tied 6 of them. Despite this, there were a lot of bright spots. Sagar, playing only in his second season, scored only 7 points less than Shadloui. Such young talent is necessary for the sport to move forward. Despite their dull season, Tamil Thalaivas have much to look forward to.

Telugu Titans have had a forgettable season this time. Winning only 1 game out of their 22 matches. However, they are a good team with a good track record. All they need to do is focus more on their teamwork, and they will return to their winning ways.

So this was the review of the wildly popular Pro Kabaddi League! Hope you enjoyed the article and are as excited as us for the next season of the pro kabaddi league.