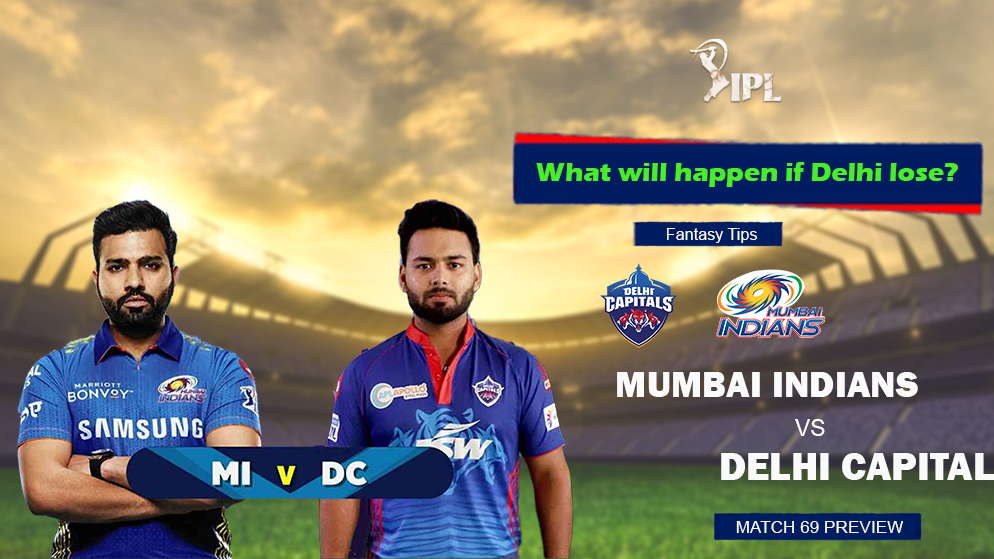 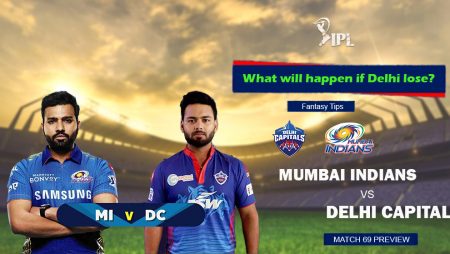 The 15th edition of the Indian Premier League (IPL 2022) has only 5 games left with the scenario is very interesting to see for the fans.

There is a fight for the No. 4 spot between Royal Challengers Bangalore (RCB), Punjab Kings (PBKS), Kolkata Knight Riders (KKR), and Sunrisers Hyderabad (SRH), and Delhi Capitals (DC).

Today, we will talk about the importance of Match 69 between Mumbai Indians (MI) and Delhi Capitals (DC). The match will be played at Wankhede Stadium, Mumbai on May 21. The encounter will be a night game and will start at 7:30 PM IST. Fans of KKR, SRH, PBKS, and RCB will be closely watching this match Mumbai Indians vs Delhi Capitals.

MI has already been out of the IPL 2022 tournament. In fact, they are the first team to get out of the tournament. Right now, they are at the last position in the points table with only 3 wins in 13 games.

So, the last match makes no context for MI. But, they will try to finish well in the tournament and try to get some confidence.

Also, they can help the other four teams in the playoffs race- RCB, PBKS, KKR, and SRH, if they beat DC in their last game.

If MI wins the last game, it will open the door for those teams to get qualified for the top 4. (MI vs DC Preview)

DC, on the other hand, has faith in his own hand. If they win the last game against MI, they will go to the 16 points. Then, only RCB can reach the same points but DC will have a better run rate than RCB. RCB has to win by a huge margin (the equation is not available), which needed a miracle.

That is why all the eyes will be on that match between MI and DC. MI has so many supporters in SRH, KKR, PBKS, and RCB. All the teams will hope that MI beat DC so that they can qualify for the top 4.

Players to watch and fantasy tips

The captain hasn’t been in a great bit of form in this tournament. He shows some glimpses of his class in the last game against SRH. He made 48 off 36 balls with 2 fours and 4 sixes. (MI vs DC Preview)

The team will ex[ect more from him in the last game of the tournament. MI would want to finish well and R Sharma can do the job for them.

T David was brought back in by MI after he was dropped after a starting few games. In the absence of K Pollard, it will be important for him to play the role of the finisher.

He has the ability to hit the long ball as we saw in the last game against SRH. He scored 46 off just 18 balls but got run out, unfortunately.

The youngster has been a revelation this year for MI. He is the highest run-scorer for MI this year. He will be a vital role in the middle order to set the inning for the team.

Bumrah hasn’t had a perfect game in the last match. He only managed to take one wicket and gave 32 runs in his 4 over. (MI vs DC Preview)

In the last match for MI, he will be important in the bowling department and the team will hope to see in a good rhythm.

The left-hander was excellent in this tournament for DC at the top. He gave so many good starts to the team with a good pace. If MI has to stop DC, they will have to get D Warner out early in the inning.

The duo of the Australians has done well in the partnership at the top. Since the ICC T20 World Cup 2021, the pair is a key factor for Australia and now for Delhi Capitals. (MI vs DC Preview)

M Marsh also got 4 wickets in 3 innings. He is an asset to the team and his utility is vital for the team.

The South African speedster has been in a good rhythm in the last few games. He is bowling at a good pace and he will be important for DC if they want to restrict MI to a small total.

What will happen if DC loses the match?

If DC lost the last game, there will be a chance for the other 4 teams (RCB, KKR, PBKS, and SRH) to qualify in the top 4.

Will DC makes it to the playoffs if they lose the last match?

Yes, DC can still qualify for the playoffs if they lose the last game. For that, they would want RCB to lose their last game as well.

Also, they also hope that if PBKS, KKR, and SRH win their last game, the margin of the win is not big.

Who will win the match?

It will be interesting to see how this match panned out. DC is peaking at the right time and has a good balance in the team.

MI missed out on an opportunity to get two points in the last game against SRH. They fell just 3 short of the target.

DC’s chances are more to win the game. But you never know, T20 is a game where one player can change the whole game on their own.

Thank you for reading the article and keep following us for all the latest sports-related updates.