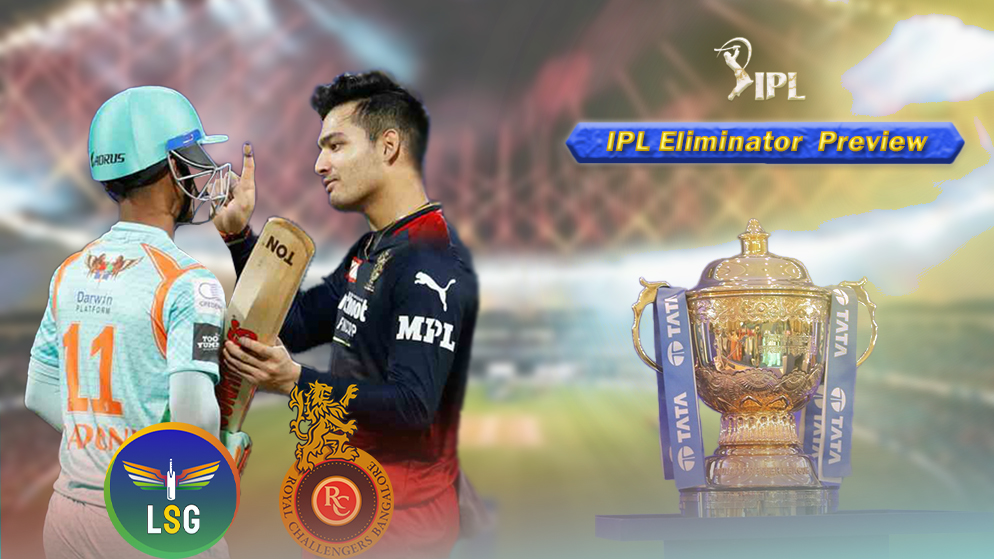 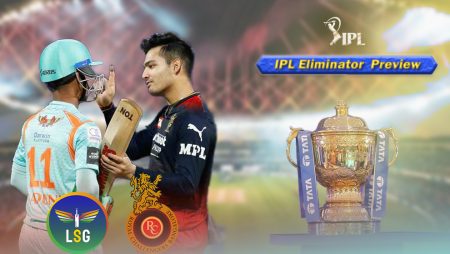 LSG vs RCB Preview– Finally, the date has come when we see the top 4 teams playing for the title in the 15th edition of the Indian Premier League (IPL 2022).

Gujrat Titans (GT), Rajasthan Royals (RR), Lucknow Super Giants (LSG), and Royal Challengers Bangalore (RCB) are the teams in the top 4 this year with GT and RR taking the top 2 spots. LSG and RCB are the other two teams in the top 4.

In this article, we will be previewing the eliminator of the IPL 2022 between LSG vs RCB.
As both teams are looking for their first-ever IPL title.

LSG finished at No. 3 in the points table with 9 wins in 14 games and their net run rate (NRR) is +0.251. They didn’t start the campaign well but they have found a way to win games after a few matches. There was a slight dip in their form but they peaked at the right time and now is the time for them to look for their first-ever title in their first season.

On the other hand, RCB started their campaign very well and they found a new hero in different games in the first half of the tournament. They also dipped at one stage and it was looking like they will be out of the tournament and DC (Delhi Capitals) will through to the playoffs ahead of them.

But this is IPL, you never know what next will do on the next ball? So how can we predict the top 4?

RCB won its last game against the table-toppers Gujarat Titans. One more positive from that game was Virat Kohli also contributed and won the man of the match award.

MI beat DC in their last league stage game and DC was out of the tournament despite a good run rate. They just need to win the match and they will be through to the top 4.

Both teams are looking for their first-ever title. RCB has come close a few times but hasn’t found a way to get over the line.

LSG, on the other hand, playing its first season and want to make history by winning the tournament for the first time.

The pitch at the Eden Gardens always provides a high-scoring encounter with a fast outfield. We can expect a good pitch in the knockouts and a good game between the two good teams.

Players to watch out for (LSG vs RCB)

The former RCB captain has found his mojo in the last game. As seen in his action on the field, he was very expressive throughout the game.

It is a big relief for RCB as V Kohli is looking good at the moment. He will be the key with Faf du Plessis to give a perfect start in the knockout game. (LSG vs RCB Preview)

The experienced Dinesh Karthik is important, especially when a tense situation comes. He has been there in this kind of tough situation before, whether for India, his state team, or an IPL team.

He was just phenomenal for RCB as far as finishing games are concerned. The same way AB de Villiers did the job for RCB for so many years.

Hasaranga took 24 wickets in the 14 games with an average of 15.08. He has one fifer in this tournament as well.

Hasaranga will be the key in the middle overs as LSG has a very good batting unit. He can bowl in the powerplay and death overs as well.

If he does well in the game, RCB can restrict LSG to a small total.

The captain KL Rahul is always consistent with the bat in the last few years of the IPL. The onus will be on him to give a fine start to the team along with his partner Q de Kock.

The South African is the 3rd highest run-getter in the IPL 2022, just behind KL Rahul.

The left-hander is important because he played his shots right from ball one and it gives time to KL Rahul to hold one end and go well in the end.

Just like W Hasaranga for RCB, R Bishnoi will be the key to LSG.

Some of the RCB batters including big names have struggled against the spinners in the recent past.

R Bishnoi is the wicket-taker for LSG and his pace variation is not easy to pick for some of the batters.

RCB relied mostly on their batting. Now V Kohli is also among the runs and Faf du Plessis, D Karthik and G Maxwell are some of the big names who can do the job for RCB in a big game like Eliminator. (LSG vs RCB Preview)

In the bowling department, other than W Hasaranga, their pacers has been good in the first phase of the inning. They have to find a way to restrict the team in the death overs, where the teams get the momentum.

LSG also has a strong batting lineup, filled with so many all-rounders. Their openers, KL Rahul and Quinton de Kock complemented each other in the opening partnership.

J Holder is one of the key players with both bat and ball for LSG. If LSG wants to go big, their batting needs to fire at the big stage. Otherwise, it will be a bag pack for them.

Does RCB have a chance against LSG?

RCB is one of those teams whom the fans expect to win the tournament but still, they haven’t found a way to get over the line.

This time, they have a good team and some experience as well. So we can expect RCB to go one step ahead and win the tournament for the first time.