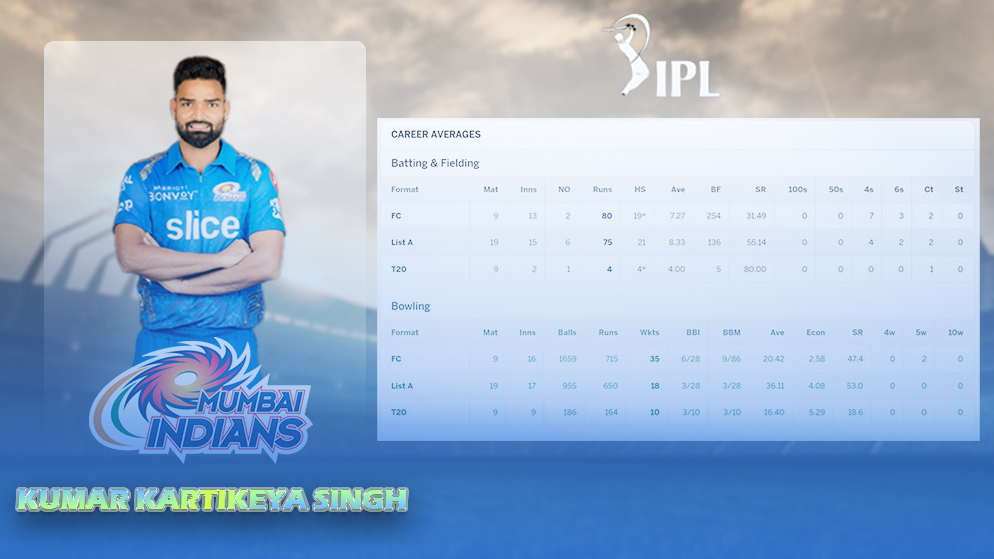 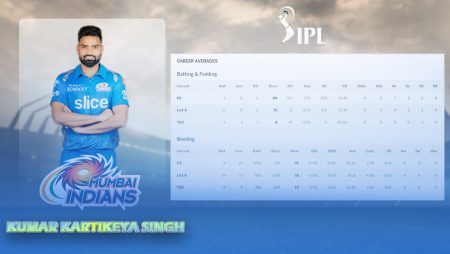 Mohd Arshad Khan, the left-arm seamer from Madhya Pradesh, was a part of the Mumbai Indians squad. He has picked up an injury that makes him out of the tournament. (MI signed Kumar Kartikeya)

Kumar Kartikeya, the left-arm spinner from Madhya Pradesh, was a part of the support team in the Mumbai Indians setup.

He was impressive in the MI nets, which helps him to get signed by the MI for a 20 Lakh INR.

Mumbai Indians haven’t had a great start in the tournament. They have lost 8 games out of the 8 they played till now.

The record didn’t show how good this franchise is. They started their campaign against DC and lost the game by 4 wickets.

Batting, bowling, and fielding. Everything is not going Mumbai Indian’s (MI) ways. The mega auction didn’t help the franchise as they lost so many match-winners after the auction. (MI signed Kumar Kartikeya)

They lost the duo of Pandya brothers who gave the team a proper balance. They can bat in the middle order and can bowl as well.

This year, MI is missing the finishers who can win games for them in a tense situation. And K Pollard’s form in these situations is even a big concern for them.

They roped in Tim David but haven’t shown faith in him after a few games.

In the bowling department, they are too much reliant on J Bumrah to do the job every time.

J Bumrah is looking toothless without a partner. MI had a rich history of a good bowling unit but this year they lacked in this part.

Who is Kumar Kartikeya Singh?

Kumar Kartikeya Singh is a left-arm spinner from Madya Pradesh. He is an Indian cricketer. On 26 September 2018, he made his List A debut for MP in the 2018-19 Vijay Hazare Trophy.

The left-arm spinner has also played 8 T20 games and got 9 wickets.

The specialty of Kumar Kartikeya Singh?

He is a left-arm spinner who bowled with a higher trajectory and gives revolution on the ball.

The left-arm spinner has been working on his bowling and will be a good prospect in MI’s bowling unit.

Will he be the man to uplift the MI’s worst start?

Mumbai Indians are virtually out of the tournament. They lost all of its 8 games. It will now take a miracle to get them to the playoffs.

There are so many ifs and buts in this regard. MI has been in the worst situation and came out of it. But this is the worst position they are in right now.

There are 10 teams in the IPL now and the competition is even tougher this time.

So to say, Kumar Kartikeya Singh will be the man to uplift the team is very hard to say.

At first, there will be a chance that he will not get into the playing XI as there are a few more players waiting in the wings.

MI’s qualification in the playoffs is now difficult. So they can experiment with some new players to create a new core group for the next few years.

So, it might be possible that the left-arm spinner from MP will get a game or even a few more games.

They don’t need a whole lot of changes in the team. MI need their old players to fire and a few changes will help MI to at least save the honors.

If they went on to win a few games in their remaining fixtures, they will be happy to finish on a good note.

Also, it will help them to get the confidence for the next year. Their next game is against Rajasthan Royals (RR), who have been in a good form with 6 wins in 8 games.

RR is at No. 2 in the points table. MI will play against them on April 30 at Dr. DY Patil Sports Academy, Mumbai Thank you for reading the article, and keep following the platform for the latest updates.