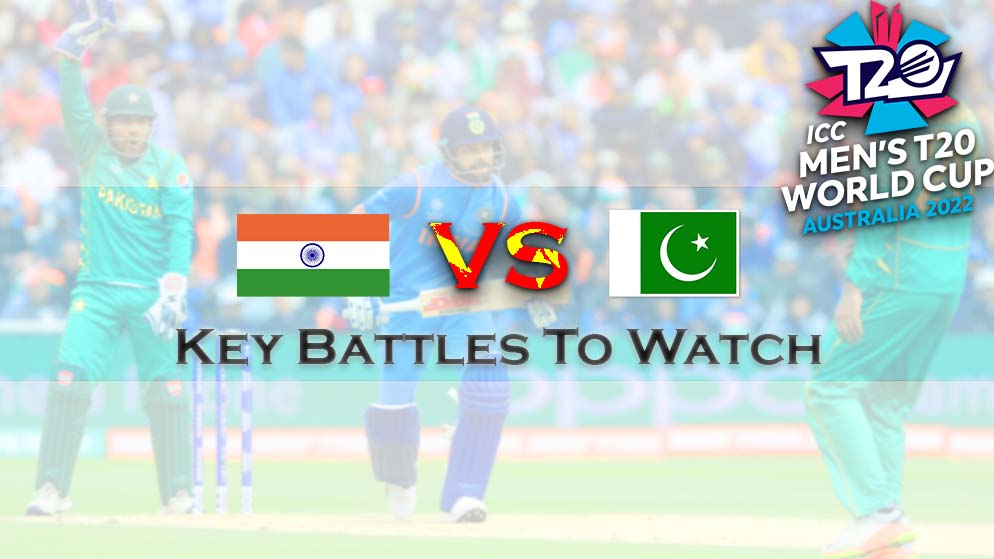 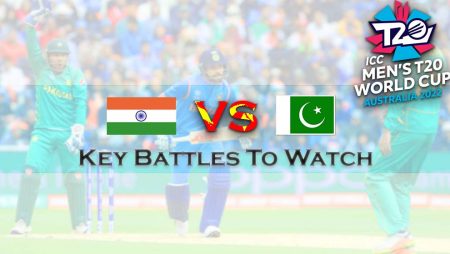 ICC T20 World Cup 2022: The battle between the arch-rivals India and Pakistan is always intense. Players from both teams tried hard to get under the skin of the opposition and to do well against each other. Today, we will talk about the 5 key players’ battle to look for in India vs Pakistan game in the ICC T20 World Cup 2022.

In the past as well, there are a lot of battles between the players from India and Pakistan. We used to love watching Pakistani bowlers like W Akram, W Younis, and S Akthar against the likes of V Sehwag, Sachin T, R Dravid, etc.

Nowadays, the players are changed but the rivalry is not. Both teams have some world-class players in the team who can win games on their own. Let’s see the 5 key battles between the players.

As we saw in the ICC T20 World Cup 2021 in UAE, Shaheen Shah Afridi set up the game for Pakistan by getting both the openers out inside his 2 overs. After that blow, Team India recovered but didn’t able to score a winning total on the board.

Shaheen got R Sharma on the first ball and KL Rahul by getting the ball back in with pace. Especially the delivery to KL Rahul was a dream delivery and was unplayable.

2. M Rizwan and B Azam vs B Kumar and M Shami

With J Bumrah ruled out of the ICC T20 World Cup 2022, M Shami is most likely to share the new ball with B Kumar.

Pakistan has two good openers in B Azam and M Rizwan. Both are very compact and very consistent in terms of runs scoring. It will be a challenge for them to face B Kumar and M Shami with the new ball just like R Sharma and KL Rahul against Shaheen S Afridi.

B Kumar and M Shami both are experienced campaigners. Both are very good with the new ball. Especially B Kumar swings the new ball both ways and troubles the batters. Rizwan and Babar have to be careful about this threat. This battle will be the one to look for. If the Indian new ball bowlers managed to get Babar and Rizwan early, they will restrict Pakistan to a small total.

Ever since D Karthik came back into the Indian team, he has been playing a role of a finisher very well in whatever matches he got. He gives momentum to the team in the death overs by playing some crucial quick-fire cameos. Pakistan’s pace machine H Rauf is one of the bowlers who has done well in the death overs. The battle between H Rauf and D Karthik will be interesting to see as both are doing well in their respective roles in ICC T20 World Cup 2022

SK Yadav loves to charge the spinners in the middle overs. He never gets shy to attack the spinners in whatever situation. He attacks them and never gave them a chance to settle down.

Shadab is the kind of bowler who loves to take wickets in the middle overs. He never got feared to toss the bowl and try to deceive the batters in flight. The battle between SK Yadav and S Khan will be interesting to see in the ICC T20 World Cup.

Pakistan has a pace battery that bowled well in death overs. But H Pandya is also in form and hitting bowlers all around the world. The battle between them will be the one to look for in the ICC T20 World Cup.

These are the few key battles that we can expect from the game between India and Pakistan in ICC T20 World Cup 2022. The game will be played at Melbourne Cricket Ground. What is your prediction for this game? Comment your opinion below.