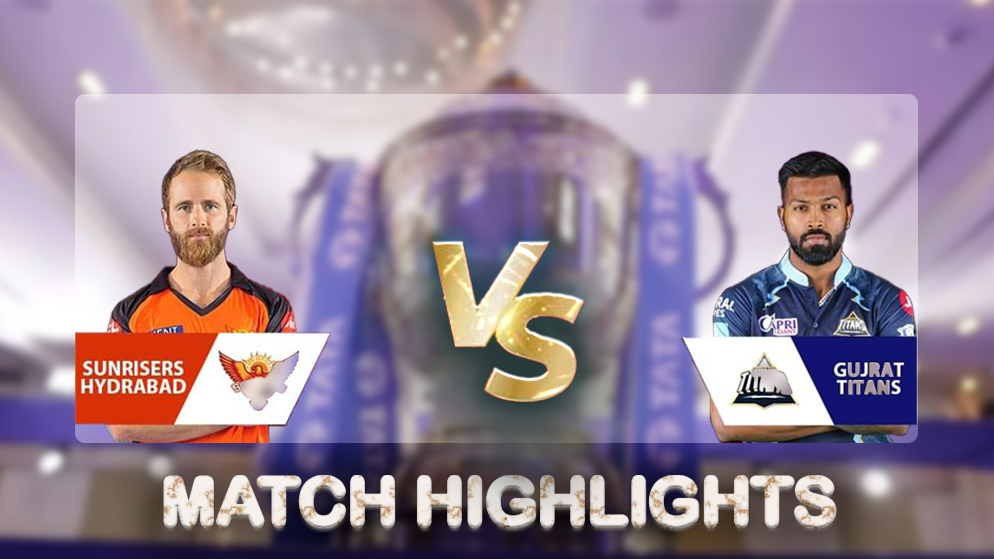 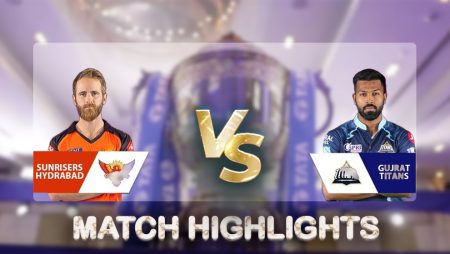 Gujrat won by 5 wickets. R Tewatia, Rashid Khan helps GT to retain the top spot in the points table. U Malik was the Mano f the Match for his outstanding 5-fer despite his team losing the game (GT vs SRH Highlights).

GT won the toss and as expected, elected to field first. Kane Williamson lost the toss for the first time in the IPL 2022.

M Shami’s first over was eventful as he bowled to a good ball but also bowled two wides which went for four.

The second over by Y Dayal also went for 11 runs, which includes two fours by Abhishek Sharma. (GT vs SRH Highlights)

M Shami took the opposition captain K Williamson and the openers added 26 runs for the first wicket. He got another wicket in R Tripathi before getting hit by him for six and two fours.

The batter was given not out on the field but in the review, there is no bat involved, and the three red means R Tripathi’s short stay comes to an end.

SRH was 53 for 2 after the first powerplay.

A Markram joins A Sharma and both started to build the partnership after the first powerplay.

Both were going well and especially A Sharma went after Rashid Khan. Sunrisers were 84 for 2 after 10 overs.

A Joseph’s 2nd over went for 12 runs, which includes a powerful six by A Markram over long-on. The fifty partnership between the two also came in that over. (GT vs SRH Highlights)

A Sharma again went after Rashid Khan. He smashed two sixes of his 3rd over. Both over deep mid-wicket. He reaches fifty in that over as well.

Y Dayal bowled a quiet 3 run, 13th over. But A Markram was going well against the pacers, hitting L Ferguson for another six.

Rashid Khan’s struggle with the ball continues as he finished his four-over wicketless and gave 45 runs.

A Joseph finally broke the 96 runs stand between Markram and Abhishek Sharma. The latter tries to go hard on the off-cutter but ends up getting bowled by Joseph.

M Shami got N Pooran, but A Markram reaches his fifty in the same over in 35 balls. He reaches this landmark with a six-over deep mid-wicket.

Yash Daya got the better of the South African in his last over. He scores 56 off 40 balls with 2 fours and 3 sixes. The left-arm pacer finished his 4 overs with 1 for 24.

Shashank Singh gives the final touch to the SRH inning. He made 25 runs off 6 balls with a four and 3 sixes.

The last over by Lockie Ferguson went for 25 runs. Shashank hit 3 sixes of the last 3 balls. (GT vs SRH Highlights)

GT openers gave a good start in the run chase. The team needs a good start when chasing a big total. W Saha didn’t waste time and played his shots while Shubmann Gill was playing the waiting game. Both have added 59 runs in the first powerplay without losing any wicket.

S Gill finally breaks the shackles with a six-over-long on to W Sundar.

The 69 runs stand was broken by the speedster U Malik. He got H Pandya as his 2nd wicket and brings SRH back in the game.

GT was 91 for 2 the halfway through the run chase.

Whom you can call if you are an SRH captain and you need wickets? Umran Malik. Yes, he again got the wicket in his 3rd overs of a well set W Saha, who made 68 off 38 balls with 11 fours and a six.

The Jammu pacer got two more wickets on the last two balls of his last over. He got D Miller and A Manohar by shattering their stumps.

GT was in trouble. They need 59 runs in the last 4 overs. But they have two of the in-form finishers at the crease, R Tewatia, and Rashid Khan.

The next two overs by T Natarajan and B Kumar went for 9 and 12 runs.

The bad day of Marco Jansen becomes worst as he went for 26 runs in his last over. Thanks to Rashid Khan, who hit 3 sixes in the last 4 balls.

Gujrat Titans won by 5 wickets. R Tewatia scored 40 off 21 balls and Rashid Khan played a handy knock of 31 off 11 balls.

U Malik was the only bowler who took wickets in the 2nd inning.

Gujrat Titans (GT) retain their first spot in the tournament with 7 wins in 8 games. Their net run rate is +0.371.

Their next game is against Royal Challengers Bangalore at Brabourne Stadium, Mumbai on April 30.

Their next game is against CSK on May 01.

An off day for the SRH bowlers:

SRH has a very potent bowling attack in M Jansen, T Natarajan, B Kumar, and U Malik. But it was just a bad day at the office for the pace battery. Only U Malik was the pick of the bowler.