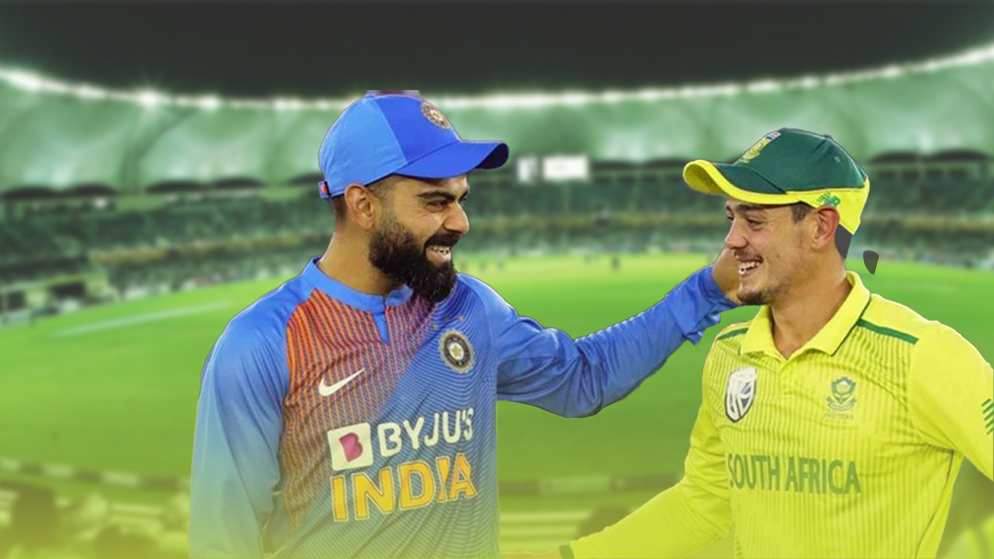 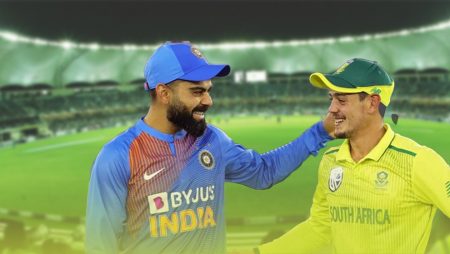 India vs South Africa- South Africa is set to tour India for a five-match T20I series starting on June 09 at Arun Jaitley Stadium, Delhi. Followed by the first game, the next three games will be in Cuttack, Visakhapatnam, and Rajkot on 12, 14, and 17 June.

The series will end on 19 June with the last T20I will be played at M Chinnaswamy Stadium, Bengaluru. All the matches will start at 7:00 PM IST.

How does India plan to benefit from a five-match T20I series vs South Africa?

The series will be good preparation for the ICC T20 World Cup in October-November. The selectors of Team India have decided to rest some of the big players like V Kohli, R Sharma, and J Bumrah after a long tournament of IPL and considering the fatigue and the bubble life.

It gives an opportunity to some of the new players who have done well in the IPL to keep themselves in contention for the WC squad. (India vs South Africa)

Some of the inclusions are H Pandya and D Karthik. Both came into the team after a long time, especially the latter. D Karthik’s inclusion came when he performed well in the finishing role for RCB consistently. Just about two months ago, he is not in the frame of mind of the selectors but now after two months, he found a place on the team.

As far as South Africa are concerned, they picked a strong team including those who played the IPL as well.

Today, we will see what are the benefit for Team India going into this five-match T20I series.

Till now, KL Rahul is the next captain for Team India after R Sharma. In the absence of the regular captain, it will be a good test for KL Rahul to show his leadership skills. We saw him captain in one of the tests in SA when Virat was not available. And also in a 3 match ODI series in SA after the test.

He lost all four matches but these are early stages in his career as a captain. If he does well in this upcoming series, he will surely be the future captain.

Right now, KL Rahul and R Sharma are the two openers for India in T20Is, but in the absence of R Sharma, Team India will try to find a new lot of openers who can be the backup openers in the WC. (India vs South Africa)

They can try out I Kishan, V Iyer, and R Gaikwad as the other options.

In the last few years, team India is very much dependent on the top 3 when it comes to batting. S Dhawan, V Kohli, R Sharma, and KL Rahul mostly occupied the top 3 spots and the team has tried so many other options as well.

In this series, they can try their middle order so that if a tense situation comes in the World Cup game, especially in the knockout, the middle order can get the team out of trouble.

Some of the middle-order batters include R Pant, SK Yadav, S Iyer, etc who has done well.

In the absence of main bowlers like J Bumrah, M Shami, and D Chahar, it will be an opportunity for some of the fringe players like Arshdeep Singh, Avesh Khan, Umran Malik, and Harshal Patel to do well and keep themselves in the squad for the ICC T20 World Cup.

When the main bowlers come into the team. A few of those fringe players can also be on the team as a backup if they do well. (India vs South Africa)

Team India can testify some of the combinations across the five matches and see how it works out. It will help the team to get the right combination before the World Cup and they can execute that in the tournament.

The comeback of the duo of Y Chahal and K Yadav

It will be a comeback of the duo of Y Chahal and K Yadav after their exclusion from the last T20 World Cup in the UAE.

Team India needs wrist spinners who can take wickets in the middle overs. As we saw in the last few years, the importance of wrist spinners is immense, especially in the limited-overs.

They went with V Chakravarthy and R Chahar last time, who haven’t had much impact in the tournament.

The team has three wrist spinners in Y Chahal, K Yadav, and R Bishnoi in the series.

Finding another finisher along with Hardik Pandya:

D Karthik is back in the side. And most likely to get the role of a finisher in the team if he fits into the playing XI.

If the team has a few good finishers, it will help them to keep the momentum when the inning ends. In this series, they have H Pandya, D Hooda, etc. And they want a few more options in that role for the WC. So whoever is in the form will get the nod in the ICC T20 World Cup.

South Africa is a good team and it will be an interesting series to watch. It will be good preparation for both the team heading into the ICC T20 World Cup.

Thank you for reading the article and keep following us for the latest sports-related updates.