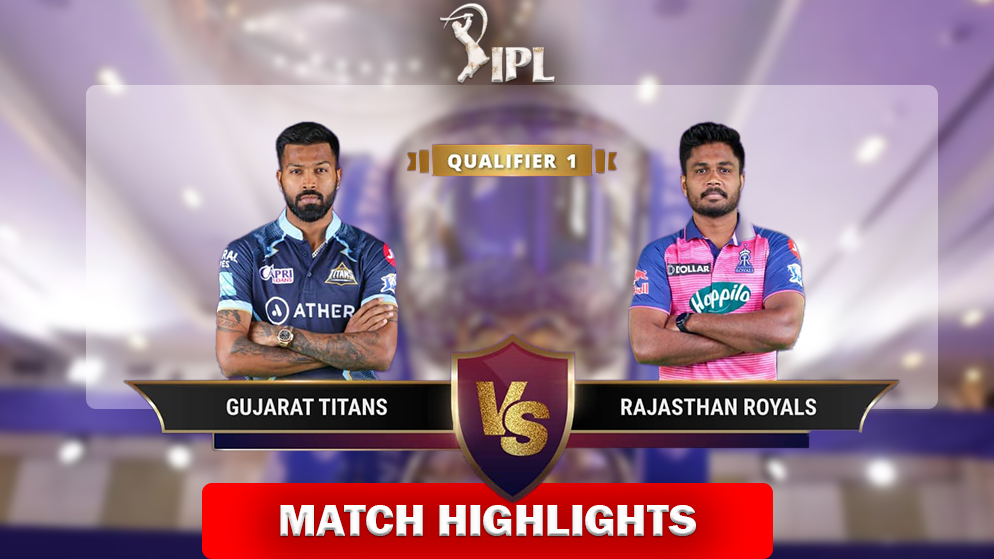 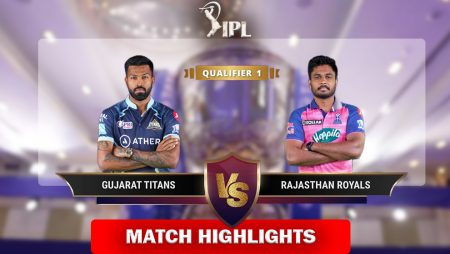 GT vs RR Highlights– GT won by 7 wickets with 3 balls remaining. D Miller and H Pandya’s unbeaten 100+ runs stand helped GT to reach the final in their first-ever season. D Miller was the man of the match for his 68 off 38 balls.

Gujrat Titans won the toss and elected to bowl first. They made one change with A Joseph coming into the team in place of L Ferguson. RR played the same team who played in the last game.

M Shami paid the price for going too full. J Buttler timed the ball sweetly and hit two boundaries in the first over.

Y Dayal got the early breakthrough for GT. He got Y Jaiswal in his first over. M Shami again got hit by J Buttler a drive on a full ball.

S Samson didn’t waste time and got off the mark with a six to Y Dayal. He hit a four in the same over as well.

H Pandya gives another over to M Shami. The over went for 14 runs including 2 fours and 5 wides.

Captain S Samson went after A Joseph in his first over. He hit two maximums to him, one over long-on and one over the backward square.

Rashid Khan came out to bowl after the powerplay. The pair was just taking ones and twos in the over.

S Samson didn’t stop even after the powerplay. He hit two more boundaries to R Sai Kishore’s first over. (GT vs RR Highlights)

R Khan bowled another quite over and went for just 2 runs.

R Sai Kishore got S Samson in his 2nd over and broke the 68 runs stand between S Samson and J Buttler. The former was the main man in this partnership. He made 47 off 26 balls with 5 fours and 3 sixes.

RR was 79 for 2 after halfway through the inning.

The batters were not taking the chances against R Khan. R Sai Kishore made a strong comeback after getting hit for a six on the first ball.

Sai Kishore’s last over also went for 18 runs including six and two fours by D Padikkal.

Captain H Pandya got D Padikkal in the next over. The left-hander was played on at the slower ball by Pandya. He made 28 off 20 balls with 2 fours and 2 sixes. (GT vs RR Highlights)

R Khan bowled his last over and went for just 3 runs. He gave only 15 runs in his 4 overs.

J Buttler, who was playing a waiting game finally went after Y Dayal’s 3rd over. He hit 4 fours to him in that over.

Buttler reaches his half-century in 42 balls in the 17th over. He hit three more boundaries in the next over to A Joseph.

He was dropped by R Khan at deep mid-wicket. But M Shami got S Hetmyer on the very next ball.

Buttler hit a four and a six in the M Shami’s last over. He got run out in the last over after hitting another six. He made 89 off 56 with 12 fours and 2 sixes.

GT lost a wicket on the second ball when they came out to chase. W Saha nicked the ball to S Samson.

M Wade was off the mark on the second ball with a four. P Krishna’s first over went for 14 runs including two boundaries by S Gill.

But the pacer made a strong comeback in his next over. He only gives 2 runs in the over. (GT vs RR Highlights)

R Ashwin came out to bowl in the last over of the powerplay. The over went for 17 runs. S Gill hit two boundaries and a six in the over.

The 72 runs stand between M Wade and S Gill comes to an end with a run-out. S Gill was going well but got run out in the 8th over. He made 35 off 21 balls with 5 fours and a six.

O McCoy, after getting the wicket of M Wade, was off his line and length on the last 3 balls. He got hit by two fours and he bowled two wides and a no-ball as well.

GT was 97 for 3 after the halfway stage. They needed another 92 runs in the last 10 overs.

The experienced duo of H Pandya and D Miller started to build the partnership. H Pandya, at one stage, was playing on 22 off just 11 balls. But he was slowed down according to the situation of the match.

R Ashwin has bowled well after he went for 17 runs in his first over.

D Miller, who was going to run a ball, breaks the shackles after hitting a six down the ground to Y Chahal.

T Boult bowled his last over and gave away 7 runs. When GT needed 23 off 12 balls, O McCoy bowled a 7-run penultimate over.

GT needed d16 runs in the last over. D Miller reaches his half-century in 35 balls in that over. (GT vs RR Highlights)

The South African hit 3 sixes to P Krishna and finish the game for Gujrat Titans (GT).

GT won by 7 wickets with 3 balls remaining. They will wait for two games and then it will be decided who is going to play the final against them. Whether it is RR, RCB, or LSG.

What next for Rajasthan Royal?

RR did a fine job to finish in the top 2 in the league stage. They have another chance to go into the final. They will have to wait for the game between RCB and LSG.

Thank you for reading the article. For more updates, keep following us.