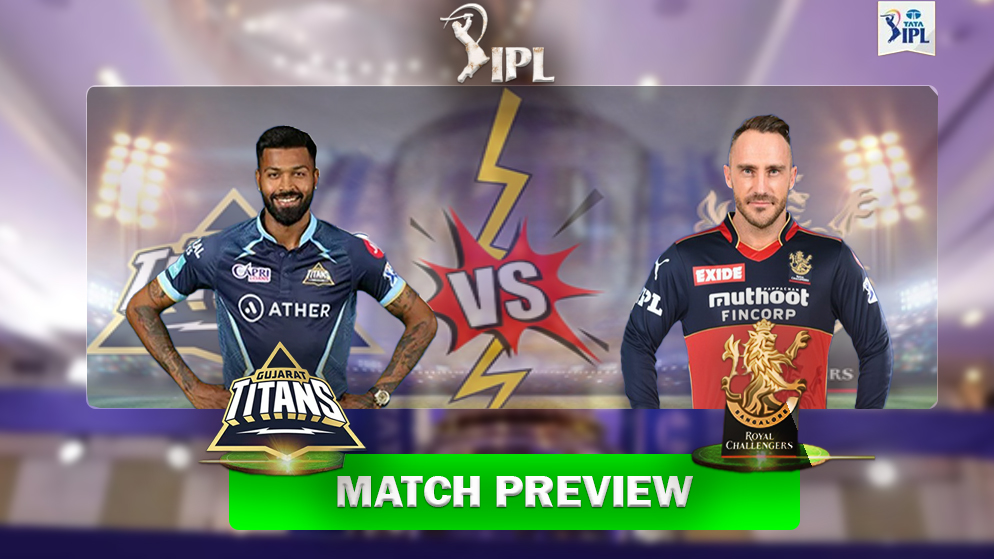 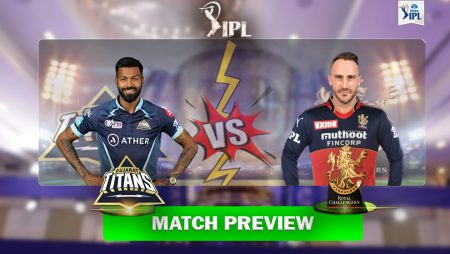 GT vs RCB Preview- Gujrat Titans (GT) and Royal Challengers Bangalore (RCB) are set to lock horns against each other in Match 43 on April 30 at Brabourne Stadium, Mumbai.

The only game that GT lost was against Sunrisers Hyderabad (SRH). SRH chased down the target of 162 with 5 balls and 8 wickets remaining.

Gujrat Titans are called entertainers in this year’s IPL 2022(Indian Premier League). Whenever they are in a bit of trouble, they have found a new match-winner.

From Rashid Khan to R Tewatia to D Miller, they have found the new hero in a tense run chase.

GT has their bowling unit sorted with the likes of M Shami, L Ferguson, Rashid Khan, etc. All of them are out-and-out wicket-taker who can turn the game for their team.

The current form of both the teams:- GT vs RCB Preview

Gujrat has started their campaign against the other new franchise this season, Lucknow Super Giants (LSG). They won that game by 5 wickets. They won the first three games. Then lost the only game till now against SRH.

They were back to the winning ways and went on to win the next four games against RR, CSK, KKR, and SRH.

V Kohli’s form is a concern for RCB and there will be a close eye on him by all the fans because it is also important in a long run for Team India in the ICC T20 World Cup as well. (GT vs RCB Preview)

Royal Challengers Bangalore (RCB) would want to go in the top 4 of the points table with a win tomorrow.

They started their campaign with a loss against Punjab Kings (PBKS) in a high-scoring encounter.

But, they went on to win their next three games against KKR, RR, and MI. They lost against CSK, SRH, and RR and won against DC and LSG in the next 5 games.

Captain Faf du Plessis has also played a few innings. The only concern for RCB is the form of Virat Kohli.

Virat Kohli hasn’t found his mojo in quite a few times now. If the big guns of RCB (V Kohli, Faf du Plessis, G Maxwell) started to fire, RCB’s batting will be the one to watch out for. (GT vs RCB Preview)

Stats of key players from RCB and GT:

The experienced D Karthik has been phenomenal in this year’s IPL. He didn’t give us a chance to miss AB de Villiers as far as finishing the games for RCB is concerned.

He scored an impactful 216 runs in the 6 innings of the 9 games he played.

S Ahmed’s stats won’t show how good he was in the IPL 2022 till now. He gives the right balance to the team. The player who can bat in the middle order and can bowl as well if needed. And his fielding credentials are not hidden from anyone.

He played so many innings and cameos to win games for RCB.

Afghanistan all-rounder has shown his batting ability in this year’s IPL. He has already played two great knocks, one of which came against his old team SRH. (GT vs RCB Preview)

The way he is playing with the bat, and the kind of shots he is playing are a treat to watch. How we can forget his snake shot (named by Rashid Khan himself).

He scored 71 runs in the IPL so far. And he is not bowling up to his standard in the IPL. But we know how good a bowler he is and he will come back.

R Tewatia, along with R Khan, is the kind of player who gives proper balance to the team.

Whenever the team needs him, he stands tall with the bat and he can bowl a few overs when needed.

Odds of winning the game by both the teams:

Gujrat Titans have been in a solid form, winning their last 4 games. They would want to continue their winning streak.

On the other hand, RCB lost their last two games and wants to go back to the winning ways. The odds of winning the game are 50-50 as both the teams have strong teams.

Thank you for reading the article and keep following the latest updates.