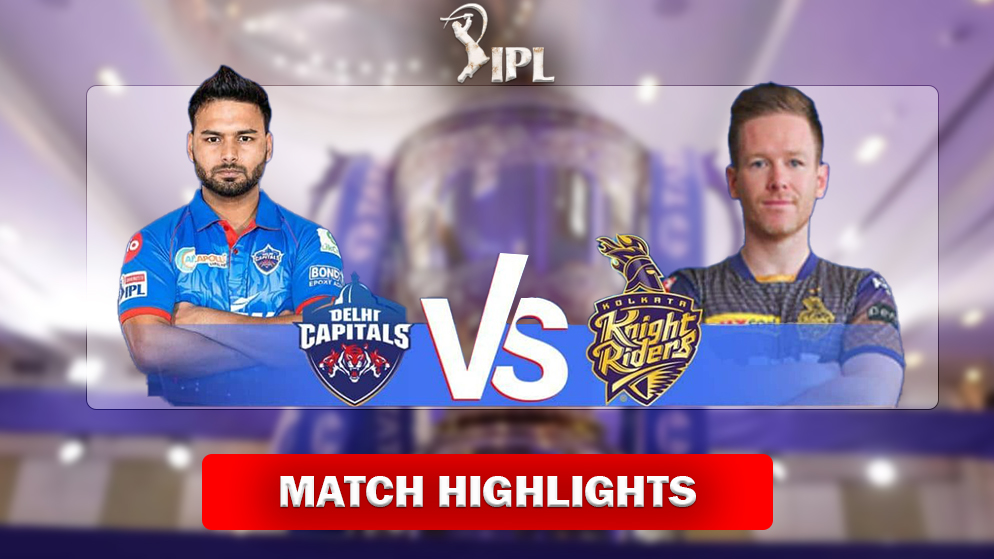 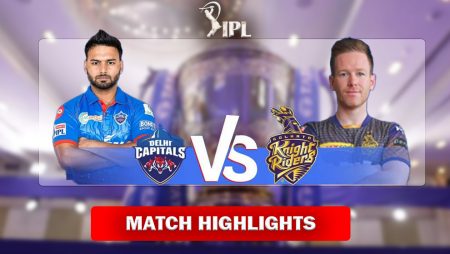 DC vs KKR Highlights- Delhi Capitals back to the winning ways. Kuldeep Yadav’s 4-fer helped DC to go on to the No. 6 position in the points table.

DC won the toss and elected to field first. They made two changes while KKR made three changes.

DC starts with the two left-arm seamers. The first over by M Rahman went for just 2 runs. And C Sakariya, in the next over, got the wicket of A Finch.

He was undone by his old age problem of coming back in. A Patel came into the bowl in the 5th over. He got V Iyer, who was not looking good in his 12 balls stay.

KKR was 29 for 2 after the end of the first powerplay.

Kuldeep Yadav was given the ball and it took him only three balls to make an impact. He got two back-to-back wickets of B Indrajith and S Narine.

KKR was in trouble after 10 overs. They were 56 for 4 with Captain S Iyer and N Rana at the crease.

The pair started to build the partnership and added 48 runs for the 5th wicket. The partnership was broken by K Yadav, who got the opposition skipper S Iyer.

S Iyer made 42 off 37 balls with 4 fours. KKR lost another big wicket in A Russell in the same over. The West Indian tries to go hard at K Yadav but ended up being stumped.

It was a little surprise that K Yadav didn’t bowl his last over.

N Rana was going well along with Rinku Singh. The pair added 62 runs for the 7th wicket and help KKR to finish with a respectable total.

N Rana reaches his half-century in 30 balls with a six-over extra cover to S Thakur in the 19th over.

The stand broke by m Rahman in the last over of the inning. He got R Singh, who made 23 off 16 balls with 3 fours.

The Bangladeshi pacer got two more wickets in the last over, including N Rana. Then later scored a well-made 57 off 34 balls with 3 fours and 4 sixes.

DC hasn’t had a great start in the run chase. They lost P Shaw on the very first ball of the inning. Thanks to the good catch by U Yadav on his own bowling. (DC vs KKR Highlights)

M Marsh came into the team after COVID. He edged the ball for a four over the first slip.

M Marsh tries to play with intent, but his inning was cut short by H Rana. The batter found the fielder at deep square leg in V Iyer.

D Warner was finding the gaps in the powerplay. He hit two boundaries in the first over to T Southee.

L Yadav was dropped by A Finch at mid-on. DC was 47 for 2 after the first over.

L Yadav and D Warner, going well after the powerplay and stitching the partnership.

The pair added 65 runs for the 3rd wicket. The partnership comes to an end with a good bounce by U Yadav. The bounce does the trick for KKR and S Narine did the rest of the job. (DC vs KKR Highlights)

U Yadav got R Pant in the next over and there was a twist in the game.

R Powell and A Patel just have to play sensibly as there is no need for big hits. The target was not big. The only concern for DC was wickets.

The pair added 29 runs for the 6th wicket. A Russel came out to bowl and Axar Patel welcomed him with a four and a six.

But in the same over, the left-hander got run out. He made 24 off 17 balls with 2 fours and a six. (DC vs KKR Highlights)

S Narine bowled a 4 run, 16th over. But R Powell goes hard against V Iyer’s first over, who is making up for a fifth bowler. His over went for 14 runs. The next over by T Southee also went for 12 runs. It includes a six-over-deep square leg by R Powell.

Captain S Iyer himself came out to bowl and bowled four dot balls to S Thakur. But the last ball went for a six by R Powell and DC won the game by 4 wickets.

U Yadav was the pick of the bowler in the second inning. He got three wickets and gave only 24 runs. S Narine was also economical in his 4 overs, gave only 19 runs, and managed to get a wicket.

K Yadav was adjudged Man of the Match for his 4 wickets.