CSK and MI, both IPL champions, are winless and on bottom 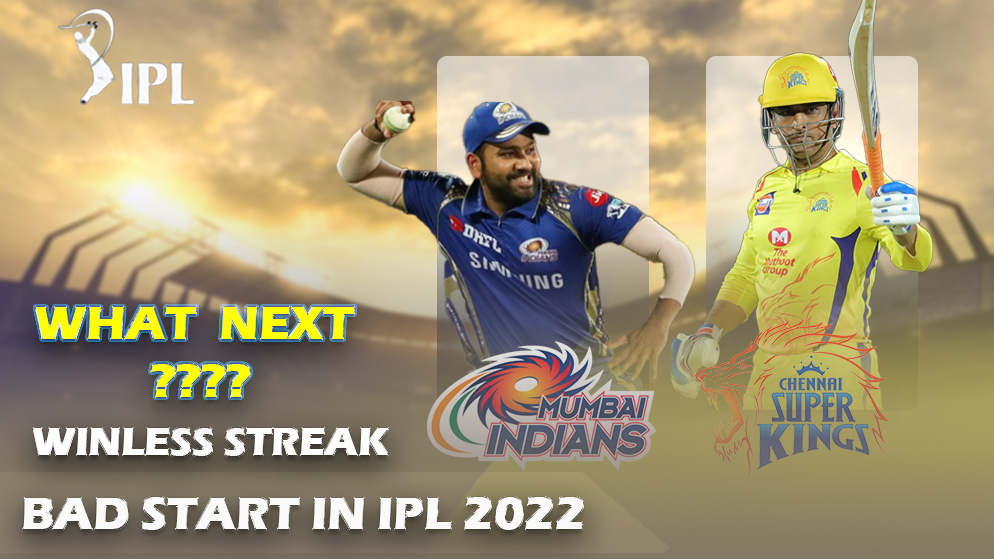 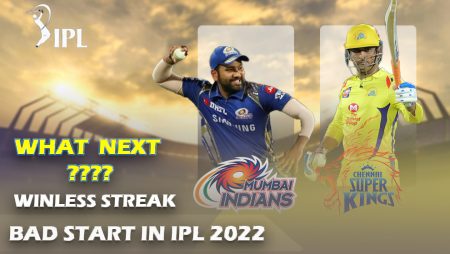 But who would have thought that two of the most successful teams in this glamourous league, Chennai Super Kings (CSK) and Mumbai Indians (MI), saw themselves in a firing line at the start of this season.

Although, there is a history between both the teams. They have been told that they are slow starters. Especially with Mumbai Indians, they have been in this situation before and made a comeback. But today, we will talk about the possible reasons for the bad start of both the teams.

But it wasn’t enough for the DC, even though, at one stage, they were 72 for 5. MI lacked the final push in the death overs. (CSK MI)

MI, at one stage, was looking good to chase down the target with the partnership of T Varma and I Kishan. But as soon as their partnership breaks, MI finishers didn’t complete the job in the end.

The game was in the balance when KKR lost A Russell in the 14th over, but P Cummins took the game away from MI, scoring the joint-fastest 50 in the IPL.

Again, MI openers started off well, putting up a 50 runs opening stand, but they lost 6 wickets in just 29 runs.

They haven’t managed to score big with U Yadav, giving them early blows. They only score 131, which KKR chased down with 9 balls to spare.

This time, their bowling cost them a game. They scored 210 in the first inning, but LSG chased it down with E Lewis giving them a finishing touch.

CSK managed to restrict PBKS to 180, but their batting hasn’t clicked and they got bowled out for 126.

Again, the batting was the main culprit. They only managed to score 154, which wasn’t enough for SRH to get their first win.

MI’s middle order, which includes is one of the reasons MI didn’t post big scores on the board. In the first game, MI, despite the great start, hasn’t scored runs in the death overs. Same in the second game against RR, when they were looking good to chase down the total, their lower order, which has K Pollard, T David, and D Sams, haven’t finished the game.

Too much dependency on J Bumrah in the death overs

MI’s bowling looks less fearless than the other seasons. They are too much dependent on J Bumrah to get wickets and to restrict the teams in the death overs.

The absence of the Pandya brothers

One of the main reasons for the MI batting order to not fire. Pandya’s brothers gave them the balance the team wants. Both are the hard hitters of the cricket ball and can bowl as well. With a mega auction, MI could not do much because they can’t retain more than 4 players.

Failure of the top order

One of the reasons for CSK’s batting to flop is their opening stand. It was their strength over the years and even last year also. Faf and R Gaikwad gave CSK a good start to set the tone. But this year, it is not happening with Faf not with CSK anymore, and R Gaikwad not scoring.

They are badly missing D Chahar with the new ball. D Chahar’s ability to take wickets with the new ball makes him a valuable asset for his team. But the latest report suggests that his participation in this year’s IPL is in doubt.

CSK’s bowling unit is inexperienced with D Chahar’s injury and J Hazelwood not with the CSK. J Hazelwood bowled well last year in the IPL, taking wickets with the new ball, and was quite economical as well. They are overly dependent on DJ Bravo to bowl well in every single game in the death overs.

What will be their possible strategic plan for the next upcoming games?

They have to sort their middle order which is causing them a final push in the batting. By getting some new faces on the team or seniors like K Pollard has to step up along with D Sams and T David. (CSK MI)

T Mills and B Thampi bowled well in patches, but they are not doing it on a consistent basis. J Bumrah can’t do well in all the matches. What if J Bumrah has an off day. (CSK MI)

They have to sort their bowling attack, not relying too much on DJ Bravo. He is a senior pro but he can’t do the job every time for CSK.

One of the reasons for CSK’s success last year was its opening stand. R Gaikwad has to step up and CSK needs to know who will partner with him. They have tried D Convey and R Uthappa, but the start is very important to set the platform.

At the moment, both CSK and MI are at the bottom of the table with 4 losses in 4 games. But they are known to make a comeback. They have done it before.