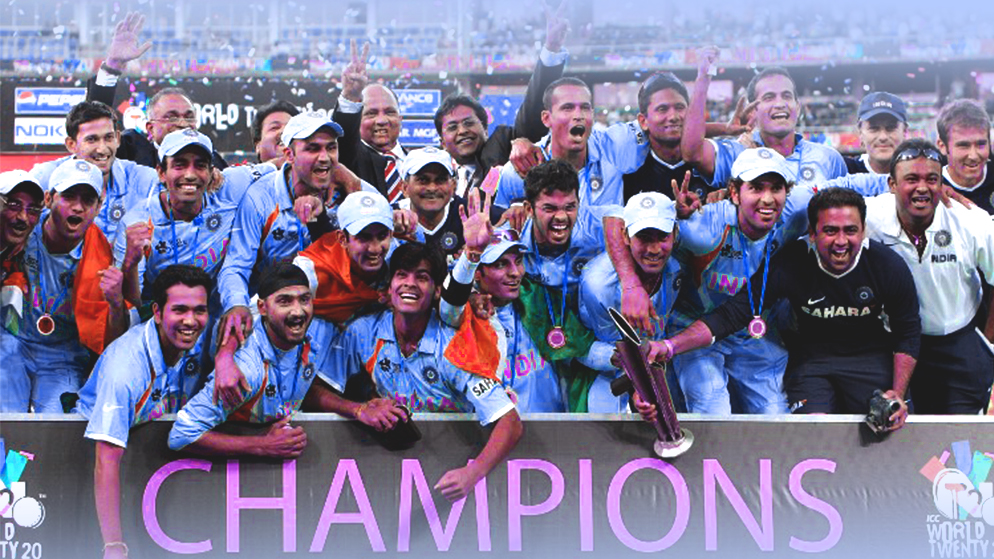 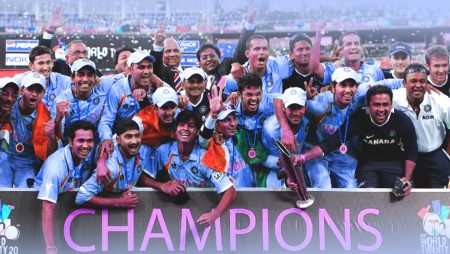 When the tournament was inaugurated in 2007, we didn’t expect to be as big as it is right now. But the fans all over the world enjoy the format and since then, it is becoming a favorite tournament for so many audiences.

People love to see T20 cricket and they enjoy the carnage in this format. Today, we will be talking about the champions of the previous year’s ICC Mens T20 World Cup. There are 6 champions in the seven completed tournaments. Let’s have a look at it one by one.

The first edition of the ICC Mens T20 WorldCup was won by Team India. It was the first time a young captain MS Dhoni becomes captain. He led a young team India which didn’t feature the likes of S Ganguly, S Tendulkar, Z Khan, etc.

They started their campaign against Scotland. The game was abandoned and there was no result. Then they played against the arch rival Pakistan. The game was tied as both the teams scored 141 runs. (ICC Mens T20 World Cup)

India won that game with the help of the bowl out. It was a rule at that time. Indian bowlers hit the stumps all three times. And Pakistani bowlers missed out all three times.

Then, in a super 8, Team India lost to New Zealand by 10 runs. But they won their next two games against England by 18 runs, and South Africa by 37 runs.

India beat Australia in the semi final by 15 runs. And eventually went on to win the ICC Mens T20 WorldCup against Pakistan by 5 runs.

Pakistan won the 2009 ICC Men’s T20 World Cup. They fell short in the last tournament against India. But they go one step further to win the tournament.

Pakistan lost their first game against England by 48 runs in the group stage.

But they won the next game against the Netherlands by 82 runs.

They won a semi-final against South Africa by 7 runs. And won the final against Sri Lanka by 8 wickets. They chased down a target of 139 quite easily with 8 balls in hand.

It is the first time England won any ICC trophy in the history of cricket.

In a group stage, they lost their first game against WI by 8 wickets. It was a rain-affected game and England lost due to the DLS method.

Their next game against Ireland also washed out due to rain. But their net run rate was better than the Irish so they qualified for the super 8 stages.

In a super 8 stage, they won all three games. They won against Pakistan by 6 wickets, South Africa by 39 runs, and New Zealand by 3 wickets.

In a knockout stage, they beat SL in a semi-final easily by chasing 129 by 7 wickets with 4 overs remaining.

They also won a final against their arch-rival Australia by 7 wickets. England chased down a target of 148 with 3 overs remaining.

WI is known for entertainment when it comes to T20 cricket. They play fearless cricket in this format with so many power hitters featuring in the team.

They proved their worth in 2012 by winning their first-ever title.

WI lost their first game against Australia by 17 runs with the DLS method. Their 2nd game in a group stage against Ireland washed out due to rain. WI qualified for the next round with a better NRR.

WI won two of their three games in a super 8 stage. They beat England by 15 runs, and NZ in a super over. WI lost their only game against SL in a super 8 by 9 wickets.

In the knockout stage, they beat Australia easily by 74 runs. They beat SL in the final in a low scoring game by 36 runs.

They beat SA, NET, and NZ by 5 runs, 9 wickets, and 59 runs respectively. In a knockout stage, they beat WI with a DLS method by 27 runs in the semi final.

In the final, they beat India by chasing down a target of 131. It was the last ICC Mens T20 WorldCup for M Jayawardene and K Sangakara.

WI won their second ICC Men’s T20 World Cup in 2016. D Sammy led WI started its campaign with a win against England by chasing down 183. The run chase was led by C Gayle’s hundred.

They won their next two games as well against SL and SA in a low scoring encounter. WI only lost one game in the first stage, which was against Afghanistan.

They beat India in a semi final by chasing down a big total of 193. And went on to win their second title by beating England. C Braithwaite hit 4 sixes in the last over to win it for WI.

Australia always does well in the ICC tournaments. But they didn’t won any T20 WC till 2021. They won the ICC Mens T20 WorldCup for the first time in 2021 by beating Pakistan in the semi final and NZ in the final.

Australia lost its only game in the group stage against England. D Warner had a dismal IPL but he showed why we rate him high in international cricket.